Cannabis and Advocacy: The Fight To Legalize 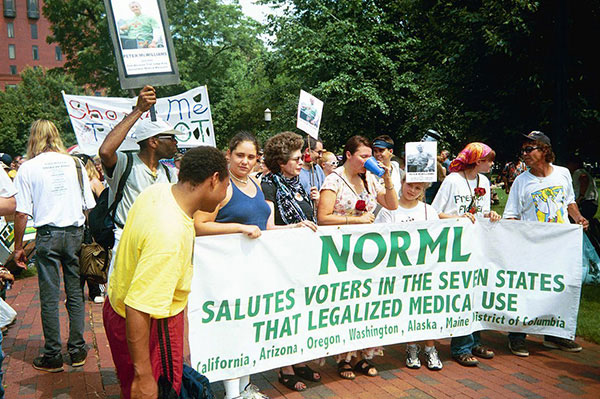 The legal cannabis industry is now active and thriving in dozens of states, and lawmakers in Washington, D.C. are mulling policy proposals that would end the federal prohibition on cannabis.

Of course, these gains didn’t materialize out of thin air. In the near-century of nationwide prohibition, advocates are to thank for expanding access to medical and adult-use cannabis, ushering in an industry and helping to change society’s thinking around the plant. And while great strides have been made, the tireless efforts of advocates have only just begun. Here’s a deeper look at those who have helped shape cannabis policy and who are working to bring about an end to Prohibition from sea to shining sea.

A brief history of cannabis prohibition and advocacy

It would be easy to look at the achievement of California voters in 1996 — when medical cannabis came to fruition with the passage of Prop 215 – and consider that the beginning of the legalization movement in the U.S. However, the truth is advocates had already been hard at work for decades before, sowing the seeds of that groundbreaking moment that millions of Americans enjoy today.

Prohibition began on the state level in 1913. By 1933, 24 states had criminalized the possession of cannabis, which until that point had widely circulated in the form of flower and tinctures. The wave of criminalization peaked with the federal prohibition of cannabis in 1937, established with the adoption of the “Marihuana Tax Act.”

The successful effort to outlaw cannabis in the U.S. was accompanied by a media campaign, spearheaded by federal Bureau of Narcotics and Commissioner Harry Anslinger; it was the campaign that gave rise to infamous propaganda like “Reefer Madness,” which today remains emblematic of public policy at the time. Criminalization was also reinforced by the adoption of measures like the Boggs Act of 1951, which created mandatory minimum sentences of 2 to 10 years for people who were caught possessing cannabis.

The Marihuana Tax Act of 1937 remained the driving force behind U.S. public policy toward cannabis for more than three decades, until it was eventually ruled unconstitutional by the U.S. Supreme Court in 1969. At that time, cannabis had become associated closely with the anti-war movement, a primary target of the Nixon Administration — so it wasn’t long until cannabis was back on the chopping block.

In the wake of the Supreme Court’s decision to strike down the Marihuana Tax Act of 1937, Congress established the Controlled Substances Act (CSA) of 1970. This measure re-established the federal criminalization of marijuana by categorizing the plant as a “Schedule I” controlled substance. This categorized cannabis as a substance with no accepted medical value and possessing the highest potential for abuse alongside other narcotics like heroin. The law was vigorously enforced by the Nixon administration and sparked what is now known as The War on Drugs.

Even in this environment, there was dissent within the government. The Shafer Commission, formally known as the National Commission on Marihuana and Drug Abuse, issued a report in 1972 calling for the decriminalization of cannabis possession in the U.S. While the Nixon administration ignored the recommendations of the Shafer Commission and opted to maintain the criminalization of cannabis federally, some states began enacting laws decriminalizing cannabis. Between 1973 and 1978, 12 states decriminalized the personal possession of small amounts of cannabis, marking the start of a 50-year journey of cannabis advocacy and the legalization movement.

And while advocates have come a long way from that dark history, advocacy efforts are far from over, said JM Pedini, development director of the National Organization for the Reform of Marijuana Laws (NORML), one of the oldest cannabis advocacy organizations in the country.

To learn more about today’s fight to legalize cannabis and shape public policy, Cannabis World Congress & Business Expo spoke with Pedini about current challenges facing advocates and what to expect moving forward as the effort for federal legalization heats up.

Learning from the past

The achievements of past advocacy efforts and their shortcomings guide modern day cannabis advocates who seek to build on the progress of previous generations. As the legalization movement spreads and the debate enters the halls of Capitol Hill, many advocates are focused on shaping exactly what a legal cannabis landscape should look like, Pedini said.

For example, there has been a major shift from a focus on advocacy for legalization to advocacy for social equity and justice in legalization. This is especially important due to the disproportionate damage the War on Drugs caused to minority communities and specifically in Black and brown communities, Pedini said. In the early days of legalization, states largely passed measures without restorative justice and social equity plans for those previously affected by Prohibition.

“As the Western U.S. states rolled out legalization, we saw that businesses are largely white-male owned and those disproportionately impacted by prohibition seemingly shut out,” they said.

In Colorado, for example, legalization rolled out in 2012 without any efforts to expunge arrest records or release previously convicted individuals. It wasn’t until 2020 that the governor began issuing pardons for possession convictions of one ounce or less.

Today, it is more common for legalization to include restorative justice components at the outset of the legalization process, Pedini said. Rather than legalizing first and making social equity adjustments later, states are working to include elements like automatic expungement, priority licensing for those affected by the War on Drugs, and support programs for minority-, women-, and veteran-owned cannabis businesses from the start.

“Illinois was the first state to try to include equity from Day One [and was] the turning point for states that came after,” said Pedini. “No state has gotten it entirely right, but now [social equity] is a top-of-the-ticket consideration, as opposed to an afterthought.”

The importance of public perspective

According to Pedini, public opinion is the primary driver of cannabis normalization and legalization, noting consumers as the No. 1 priority of advocacy. Today, advocates drive home lessons learned in early adopted states and place consumers at the top of the priority list when developing an industry from the ground up.

“One of the primary objectives of [NORML’s] mission statement is to move public opinion,” Pedini said. The best way to do so is providing access to education, they added.

“People used to believe whatever they read in the newspaper,” continued Pedini. “As data becomes more readily accessible and information on cannabis is disseminated more readily and factually, the public can now decide for themselves.”

While just 12% of the public supported ending prohibition in the 1970s, an overwhelming 91% of Americans now support medical cannabis legalization and 68% support adult use legalization. This sway in public opinion puts pressure on legislators to act and support policies reforming cannabis laws.

“Voting is critical,” Pedini said, noting NORML’s efforts to make political information readily accessible to the public. In addition to creating a voter’s guide to “legalize marijuana in your state,” NORML hosts voter registration via their website as well.

Where we are at today

While public policy has not quite caught up to public opinion, the demand for the end of federal Prohibition is growing. Federal anti-cannabis policy not only continues to fuel Prohibition, but presents myriad challenges for business owners, both plant-touching and ancillary, who struggle to obtain basic services due to Prohibition. However, lawmakers have set their sights on federal action in recent history.

For example, the Secure and Fair Enforcement (SAFE) Act would protect banking institutions that work with legal, legitimate cannabis businesses. If passed in the Senate, the SAFE Banking Act would be the first time the federal government recognizes the legal cannabis industry.

And while some argue that the SAFE Banking Act should not pass before cannabis is removed from Schedule I or otherwise decriminalized, Pedini said, “You have to meet your legislature where they are.”

Pedini said this is to the credit of the American public and the work that NORML spearheads. Still, while Capitol Hill may be opening up to the idea of federal legalization, Pedini said, there is still a lot of work to be done.

“People want everything, but that’s not how policy change typically happens,” Pedini continued.

Still, there is some support among federal lawmakers for full legalization as well. On April 1st, 2022, the U.S. House of Representatives voted to pass the MORE Act, which would decriminalize cannabis across the United States if signed into law. This legislation would also implement social equity reform measures, including the expungement of prior cannabis convictions.

What businesses can do to take action

Advocacy doesn’t always have to be a grassroots effort; industry leaders can also take part in driving the conversation around cannabis, access, and public policy forward. If your business is looking to support advocacy efforts, Pedini said to keep your focus on the consumers.

“There is no industry without consumers,” they explained. “Different people will want to engage in different ways and at different levels, and advocacy doesn’t work if you don’t meet your advocates where they are. We try to make advocacy accessible to everyone.”

NORML’s Take Action page is one such resource. It provides an extensive list of federal and state priorities, as well as contact information for representatives.

And In New York City, the annual NORML FORML is held each year the evening before Cannabis World Congress & Business Exposition. This year’s gala fundraiser event will be held on Wednesday, June 1st. Visit NORMLFORML.com for more information about this year’s event, sponsored by CWCBExpo.